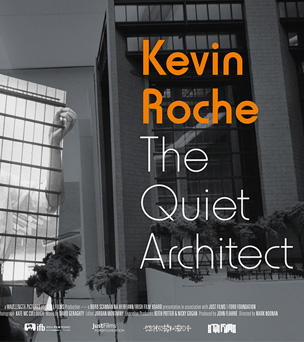 Kevin Roche was an award winning Irish-American architect who began his career in the 1940s, and in that time had witnessed the rapid evolution of architecture in the modern era. Kevin Roche: The Quiet Architect charts the work of a highly influential architect who up until he passed away this year on March 1, 2019 remained an engaging but modest man.

This documentary portrays the life and work of this highly influential architect and what drives a modest man, with no interest in fame, to refuse retirement and continually look to the future regardless of age? Kevin Roche’s stated philosophy was that “the responsibility of the modern architect is to create a community for a modern society”, and it is through Roche’s work that we examine the relationship between architects, their clients and the public they ultimately serve.